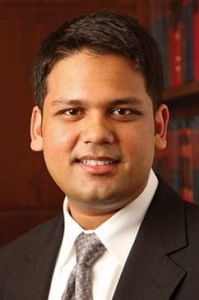 Prashanth Chennakesavan is a first-chair trial lawyer and a partner in the firm’s complex commercial litigation, class action and intellectual property practice groups. He has extensive experience representing clients in federal and state courts, and before arbitration panels, throughout the country in a broad range of cases, including trade secrets, antitrust, intellectual property, and other complex commercial litigation.

Prashanth has served clients of all sizes—ranging from start-ups to the largest companies in the world—across numerous industries, including technology, financial services, retail, and entertainment. He carefully manages each stage of the litigation—from initial evaluation through trials and appeals—with an eye towards achieving clients’ business goals and getting results. In just the past couple of years, he has successfully defended clients at trial, obtained dismissal of multiple class actions at the pleading stage, and won numerous appellate and dispositive arguments in the Ninth Circuit and federal courts in California and New York.

Before joining the firm, Prashanth practiced in the New York and Los Angeles offices of Quinn Emanuel Urquhart & Sullivan, LLP.

Prashanth is admitted to practice in New York and California, and maintains offices in New York City and Los Angeles.

Mr. Chennakesavan is admitted to practice in California and New York.