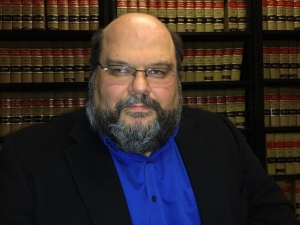 Vincent Pollmeier has been involved in the most cutting-edge of high tech and has represented clients at big firms and small boutiques.   He has practiced at IP specialists, Knobbe Martens and Karish & Bjorgum, PC, but spent fourteen years at Quinn Emanuel Urquhart & Sullivan, LLP, where he held the title “Chief Technology Counsel.”

He brings to the practice of law a unique combination of technical and legal acumen. Prior to practicing law, Vincent spent more than a decade involved in the development and operation of complex systems, culminating in service as a Principal System Engineer with NASA’s Jet Propulsion Laboratory. Before his work with NASA, Vincent was a researcher at the University of Texas Center for Space Research involved in the testing and early utilization of the prototype GPS satellites. Vincent has substantial experience in the analysis of system failures and faults involving complex hardware and software systems and has a broad experience base in computer hardware, software, communications, advanced materials and propulsion.

As an attorney Vincent has extensive litigation experience representing both plaintiffs and defendants regarding numerous technologies, including aerospace, electronics, communications, and computer technologies in a wide range of contexts focusing on patent infringement and trade secret misappropriation, but also including breach of contract, insurance claims, white collar criminal defense, government investigations, and patent evaluations.  Vincent has represented multiple clients relating to lawsuits or investigations arising from engineering failures or accidents. His clients have included TRW, XM Satellite Radio, Northrop Grumman, ViaSat, SSL, Lockheed Martin, and Caltech, among others.

Vincent’s background and experience allows him to relate complex technologies to lay judges and juries in a wide variety of cases and maximize the value of retained experts and technical witnesses. He is admitted to practice before the U.S. Patent & Trademark Office and is a co-author of the reference “Trade Secrets: Law & Practice, published by Matthew Bender & Co. (LexisNexis). Vincent has, for many years, taught a one-day short course on intellectual property for regulatory science graduate students in the University of Southern California, College of Pharmacy.