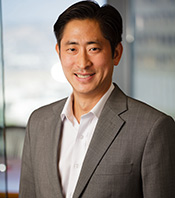 Enoch Liang is a co-founder of the firm and launched its San Francisco office.  He also served as the firm’s most recent past managing partner.  He is an experienced IP attorney, and has litigated all facets of IP disputes (including patents, copyrights, trademarks, trade dress, trade secrets and idea theft claims).  Enoch has served clients across numerous industries including in technology, retail, cosmetics, automotive, and entertainment, in cases venued in California, Delaware, Texas, Ohio, and New York, as well as in China and Hong Kong.

Enoch is AV-rated by Martindale-Hubbell and in 2016, the BTI Consulting Group honored Enoch as a “Client Service All-Star,” one of only 30 IP attorneys nationwide in the entire report. He has been named a “Super Lawyer”  by Thomson Reuters multiple times. Enoch was also recently selected by his peers for inclusion on the 2018 list of The Best Lawyers in America©, after being named a “Recommended Expert” in trademark litigation by the World Trademark Review. American Law Media and Martindale-Hubbell also rated him as a “2014 Top Rated Lawyer in Intellectual Property Law.”

In addition to IP matters, Enoch has successfully represented clients in business litigation, including in partnership disputes, breach of contract disputes, and consumer class actions. Since mid-2010, Enoch has argued (and won) all the appeals he has handled, including four in the Ninth Circuit and several more in California state courts.  In that same timeframe, Enoch served as the first chair trial lawyer in seven trials or arbitrations – winning all of them.

Enoch also has had the unique distinction of practicing commercial and IP litigation with leading law firms in both the United States and China. This provides him with rare experience and perspective regarding the legal systems of the world’s 2 largest economies, as well as an extensive network of contacts in both countries.  In China and in Hong Kong, Enoch focused his practice on IP matters, including the acquisition and enforcement of IP rights. He has also personally attended numerous trials in China. With this background, Enoch is well-positioned to counsel clients engaged in cross-border business—either from the US going to China, or vice versa—as well as the attendant litigation that often arises.

(1) According to Martindale-Hubbell®, “AV Preeminent is a significant rating accomplishment – a testament to the fact that a lawyer’s peers rank him or her at the highest level of professional excellence.”  Martindale-Hubbell® PEER REVIEW RATINGS™ reflect a combination of achieving a Very High General Ethical Standards rating and a Legal Ability numerical rating. A threshold number of responses is required to achieve a rating.